This is video that I took at some of my favorite places in Uganda, Rwanda, and, Ethiopia; three of my favorite countries in the world. The #chimpanzee in the collage […]

This is a photo of Sara, one of my favorite chimpanzees at Ngamba Island. Sara (along with 3 other females) was rescued from the illegal wildlife trade, and brought to […]

The Gelada Mountain Monkeys are an endemic species, only found in northern  Ethiopia. They are an Old World terrestial primate  that live in a complex multi-level society. Gelada’s have a […]

http://original.livestream.com/fenixlive/video?clipId=pla_7710cc05-3ff1-44a6-9cb6-7ac1efc42e8a&utm_source=lslibrary&utm_medium=ui-thumb The Fenix Supper Club live stream of our music benefit for the ‪Chimpanzees‬ on Ngamba Island Chimpanzee Sanctuary is now ready for viewing on the Fenix website. The performances […]

Ngamba Island Chimpanzee Sanctuary was founded in 1998 in Uganda by Dr. Jane Goodall and a group of founding trustees. They have 95 acres of natural forest habitat for 48 […]

Pasa is approximately 17 years old. A man from northern Uganda purchased her as an infant from a Congolese wildlife trader. Knowing that he had broken the law, the man […]

I am honored to be working with The Ngamba Island Chimpanzee Sanctuary located on the peaceful waters of Lake Victoria in Uganda. The Sanctuary is home to 48 chimpanzees that […]

The Elephants in Uganda, East Africa

Visiting Murchison Falls National Park in ‪Uganda‬, East Africa‬ was a spectacular experience. I saw beautiful ‪elephants‬ living together in family groups. Their ‪tusks‬ are stunning and gargantuan. How can poachers and criminals be so heartless, slaughtering […]

The Mountains In Lalibela, Ethiopia.

Trekking to the Asheton Maryam Monastery in Lalibela Ethiopia was very scenic. The Lasta mountains and craggy escarpments were spectacular to see during this journey. Lalibela is a UNESCO World Heritage sight, famous for the 12th-13th century rock-hewn Ethiopian Orthodox Christian churches.

The Gorgeous Skies of Rwanda

I love the skies in Rwanda, especially during dawn and dusk. This photo was taken during my road trip to Bugesera, located in the Eastern province.

Basking in the beauty at the edge of Lake Rumira in Gushora, Bugesera in Rwanda 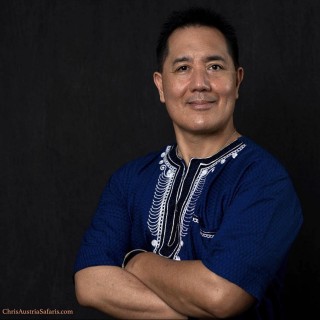 I am the CEO of Christopher Austria Safaris Ltd., a unique travel company based in Kampala, Uganda. I lead wildlife, and cultural safaris in Uganda, and Rwanda. I am also wildlife conservationist, photographer, videographer, and founder of Chris Austria Productions LLC. Our mission is to empower communities and conserve wildlife through film, photography, and music. We are filming a documentary in Uganda on the strong connection between community development, rural health care, and wildlife conservation.